RevCyn is the blog of the Rev. Dr. Cynthia Landrum, minister of the Universalist Unitarian Church of East Liberty, in Clarklake, Michigan.  Cindy grew up in Pleasant Ridge, Michigan, and grew up UU, attending the Birmingham Unitarian Church in Bloomfield Hills.  She received her B.A. in English and Psychology from the University of Michigan, and her M.A. in English from the University of Georgia, where her thesis was titled, Narratives in the AIDS Service Community.  She attended Meadville Lombard Theological School for her D.Min., where her doctoral thesis was on The Future of Unitarian Universalist Feminism: Interviews with Third-Wave Women Ministers.  Cindy held student ministries in Marquette and Houghton, MI, an internship in Milwaukee, WI, and summer ministries in Rockford, IL and Rochester, NY.  Cindy served briefly in Houston, TX, and was ordained as a Unitarian Universalist minister in 2002 by the Unitarian Universalist Society of Gardner, Massachusetts, where she served before becoming coming to UUCEL in August of 2004.  Cindy lives in the Jackson, Michigan, area along with her husband, Peter Morrison; their daughter; and two cats.
Cindy's ministry is grounded in her experience of being raised Unitarian Universalist and seeing the power that Unitarian Universalism has to affect lives and change the world.  She is passionate about religious education, social justice, and diversity, particularly the diverse theologies found in our faith.  As a humanist raised by UU Christians, and having explored and incorporated aspects of feminist theology and Paganism into her life, she believes in weaving together these faiths and others to create a church where we "live our religion" through worship, social mission, and religious education.

Popular posts from this blog

Garrison Keillor Is no "Companion" for Unitarian Universalists

Many Unitarian Universalists, myself included, are regular NPR listeners.  And among them, many listen regularly to Garrison Keillor's "A Prairie Home Companion."  It's on weekly at about the time I leave church, so I have listened to it many times.  Garrison Keillor makes a regular practice of poking fun at Unitarian Universalists on his show.  I've often had church members come and tell me he mentioned us again, often with delight, because we're so rarely mentioned in the media.  One example of a Unitarian Universalist joke attributed to Garrison Keillor is: "A sign at the Unitarian church said: Bible study at 7:00. Bring your Bible and a pair of scissors."  So, yes, some of the joke are funny, some point out our foibles and idiosyncrasies.  But lately I've been turning off NPR whenever "A Prairie Home Companion" comes on.  Listening to him talk about us over the years it's becoming more and more evident that he isn't laughi…
Read more 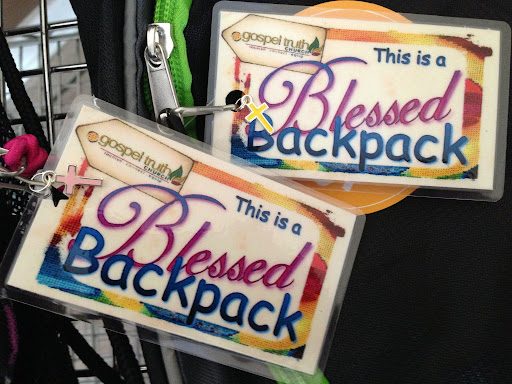 From my wonderful colleagues I got the idea of doing a "blessing of the backpacks" as the children of the congregation go off to school.  It's not a new idea -- Christian churches have been doing it for years, and apparently some UUs, too -- but I had never heard of it before.  Churches often apparently put some sort of zipper pull tag on the backpacks.  Here's an example found on Pinterest:


A couple of colleagues shared their ideas, and some images, in a closed Facebook group, which started me thinking.  I'm fairly crafty with things like this, so I knew I could come up with something.  I was inspired by Karen G. Johnston's example created by her DRE and a member, but couldn't figure out their fancy knots:
But, on the other hand, I do have some tricks up my own sleeve.
Here's my prototype:

My prototypes cost me over a dollar each to make, but to make in bulk they'll cost less than 30 cents apiece, not counting tools or jump rings.  You start wit…
Read more

More on Atheism, Agnosticism, and Humanism, and the Nature of God

First, some general definitions.
Atheist: Someone who does not believe in God. There are many distinctions you can make among atheist--strong, weak, implicit, explicit, practical, theological--but the two major ones are strong atheism vs. weak atheism. A strong Atheist believes that it is certain and clear that there is no God. A weak Atheist does not believe in God, but doesn't assert the lack of God--it could be said to include all forms of non-theists.

Non-theist: Someone who does not assert a belief in God. I would include Agnostics, Atheists, most Buddhists, and many others in this group. Some would argue any non-theist is an atheist. I generally reserve the term "Atheist" for the group that is really strong Atheists, and use "non-theists" as the catch-all term.

Agnostic: Someone who does not know whether or not God exists. Again, can be divided into many categories, the main ones being strong or weak. A weak Agnostic does not know if there is a God, …
Read more

Cynthia L. Landrum
The Rev. Dr. Cynthia L. Landrum is a Unitarian Universalist minister, artist, writer, parent, and justice advocate. The opinions expressed here are solely her own, and do not represent the views of the church or any other organization she serves.