- April 01, 2020
Many UU congregations are beginning to think about how to do an online annual meeting.  The UUA has created a helpful page for this at  https://www.uua.org/leadership/library/voting-online .  However, as someone who ran the online voting for the offsite participants at the UU Ministers Association's annual meetings for several years, I have some additional advice. Voting Methods Zoom Polling:  Those who are using Zoom as a platform for meetings and worship services will have noticed that Zoom has a "polling" feature.  The advantage of this is it's integrated with Zoom, Zoom will save your results, and the results can be shared easily in the meeting.  There are some disadvantages to using Zoom polling, however, as well.  One disadvantage is that if two members in a household are sharing a screen, they will only get one vote.  With the prevalence of smart phones, this may be minimal, and you could ask for a roll call of vote.  Another disadvantage is that Zoom only
Post a Comment
Read more 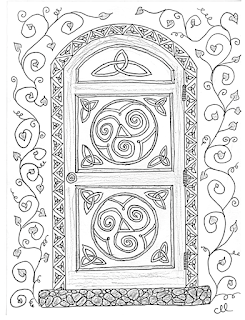 "Love Letter to East Liberty," delivered at the 06-03-2018 worship service: This is not actually a sermon. It is a love letter. Dear Universalist Unitarian Church of East Liberty, I know it is hard right now to keep spirits up. I know some of you are mad at me for leaving, or worried about what will happen. I know it’s disheartening to not know yet who your next minister will be, and to learn that you’ll be having a part-time minister so that will leave even more work on the shoulder of volunteers. But I have so much faith in you, because I know you and have loved you for so long. Here’s what I know. I know that many churches out there in historic buildings have buildings that are crumbling. They are struggling to keep their building workable, and they can’t even imagine how to make their buildings accessible. And I know you, here, are keeping your building from becoming a historical museum, just an homage to the past, but moving it ever forward to what you n
Post a Comment
Read more 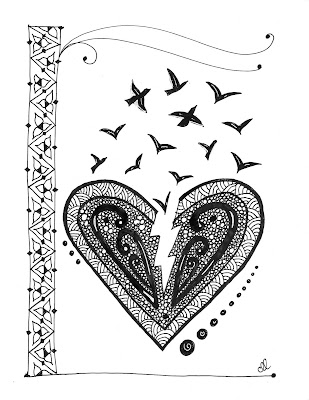 This is a doodle I made based on a sermon about heartbreak and gun violence and the healing power of community.  The sermon quoted Mary Oliver's poem " Lead ."
Post a Comment
Read more 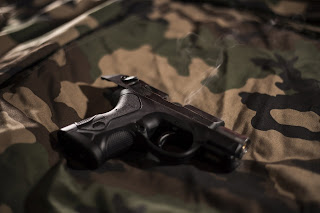 Photo by  Quentin Kemmel  on  Unsplash I'm realizing that although I have at least two degrees of separation from any mass shooting, these school shootings and other mass shootings are still something of a trigger for me. It's at least in part related to the 2013 shooting deaths of Chris Keith and Isaac Miller . Chris Keith was a former member of my church. She and her son Isaac were killed in an act of domestic violence, by her estranged husband. Like the killer in the recent school shooting, Chris's killer was a known threat. These are the things I know about her killer: He had been abusive of Chris for some time. Chris minimized the abuse when talking to me, saying it was the first time, when it wasn't, but she wasn't ready to leave. What I didn't know, but found out after her death was that authorities had been called all the way back in 2003, before I met her. In the news it was revealed that Chris had taken out a personal protection order agai
Post a Comment
Read more

- February 15, 2018
When I was a child, we had fire drills and tornado drills. That was it. No longer did we have the drills of what to do during bomb raids or, worse, nuclear attack, knowing that hiding under our desks would be ineffective. During my daughter's entire childhood, active shooter drills have been a regular part of the school routine. The world she has grown up in is different than the one I did. When I did my internship, training for the ministry, the congregation I was interning at did their very first fire drill in their 150-year history (on my first Sunday in the pulpit). An active shooter drill or an active shooter policy was something we would never have thought of. But they have one now . Today I got a different sort of e-mail from the superintendent of my daughter's school system than I've ever gotten before after a school shooting or other incident. In this e-mail, the superintendent issued the usual sorts of calming statements about how they are thoughtful about s
Post a Comment
Read more 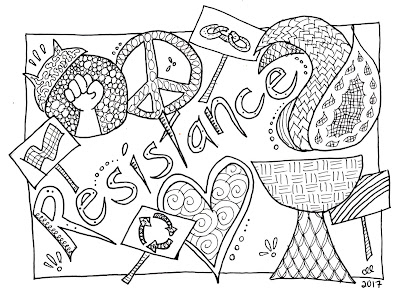 I'm working on getting back into my doodling practice, and also back into my blogging practice.  Hopefully you'll see more posts soon.  Meanwhile, this doodle is a year old -- but the need for resistance continues. You have permission to use this art, with attribution, for any liberal/progressive resistance-related or Unitarian Universalist-related purpose.
Post a Comment
Read more

The Painful Steps to Justice

- February 16, 2017
When I came to Jackson, MI in 2004, it took me a while to realize how unsupported the LGBTQ community felt here. During my seminary years, all my LGBTQ friends and colleagues were entirely out of the closet, and as someone with cis-gender and heterosexual privilege, I had basically forgotten that the closet could still exist. But here in Jackson, I found, the closet was still deep and wide. People I knew through church or PFLAG or social justice work might be out in one context and still in with family, work, or other friends. So I learned this again, and said it many times to people in one context or another that Jackson was not as progressive with LGBTQ rights as many other locations.  I said it, and I knew it, but I hadn't felt it. In Michigan we have no state-wide protections for LGBTQ people. In fact, when our state's civil rights legislation, the Elliott-Larsen Act was passed in 1976, LGBTQ protection was specifically left out because of fear that adding LGBTQ protecti
Post a Comment
Read more
More posts

Cynthia L. Landrum
The Rev. Dr. Cynthia L. Landrum is a Unitarian Universalist minister, artist, writer, parent, and justice advocate. The opinions expressed here are solely her own, and do not represent the views of the church or any other organization she serves.